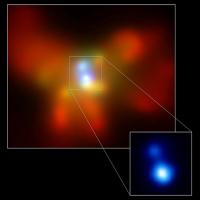 I have a second career working to increase the number of women in science. (See articles in bibliography.) I chaired the American Astronomical Society’s Committee on the Status of Women in Astronomy, and re-invented its newsletters AASWOMEN (weekly email) and STATUS (twice yearly journal; see www.aas.org/~cswa/pubs.html). I organized the first conference on Women in Astronomy in 1992, from which we issued the Baltimore Charter (released at the 1993 June AAS meeting, BAAS, Vol. 25, p. 913, or Meeting 182 paper 65.01; see www.stsci.edu/pubinfo/BaltoCharter.html), and a decade-later conference at Caltech in 2003, for which I am currently editing the Proceedings. I helped organize the American Physical Society’s 2007 Gender Equity Conference, and was elected a Fellow of the Association of Women in Science in 2006. I regularly write and speak about this issue, including in 2005 an appearance on National Public Radio’s Science Friday and an Op/Ed piece in the Washington Post.

Invited Talks and Papers on Women and Minorities in Science