Home » Hidden Supermassive Black Holes (or, Solving the Mystery of the X-Ray Background)

Hidden Supermassive Black Holes (or, Solving the Mystery of the X-Ray Background) 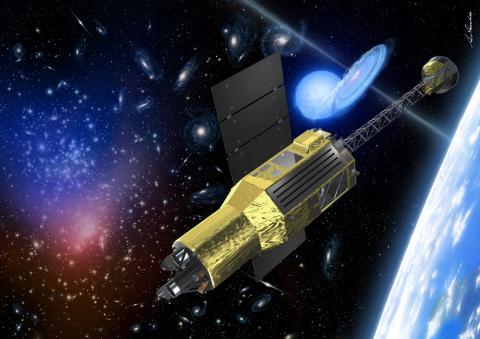 Designed the GOODS1 multiwavelength survey, a major observational project involving NASA’s three Great Observatories, the Spitzer Space Telescope, the Hubble Space Telescope, and the Chandra X-ray Observatory. Discovered a large population of obscured X-ray sources, optically very red and faint (or even undetected) yet bright in the far-infrared. Developed self-consistent far-infrared through X-ray models, corresponding to AGN unification, to interpret the multiwavelength data in GOODS and other surveys, showing that there are three times as many obscured supermassive black holes as unobscured ones, and this ratio increases with redshift. Explained quantitatively the spectrum and intensity of the X-ray background2 and used Spitzer observations to show AGN contribute less to the infrared extragalactic light than previously estimated. Through direct modeling of observed spectral energy distributions we showed that dust re-radiation produces the infrared emission in AGN, and that the optical emission in obscured AGN comes entirely from the host galaxy. Analyzed the host galaxies of several hundred AGN in the GOODS fields, finding that they often have early-type morphologies and colors.

1 GOODS stands for Great Observatories Origins Deep Survey. This project involved proposals for 700+ hours of Spitzer and 600+ hours of Hubble pointed at the two ultra-deep Chandra fields. PI on the Spitzer project is Mark Dickinson, and PI on the Hubble project is Mauro Giavalisco, who have concentrated on galaxy evolution. My scientific interest in GOODS is active galactic nuclei, which is the only part of the project that required X-rays, hence the location and area of the GOODS pointings.

2 That the XRBG required obscured AGN has been argued for a long time from X-ray observations but optical surveys did not reveal the putative population of obscured AGN. With GOODS we detected, for the first time, hundreds of these luminous objects in the infrared, where the absorbed EUV/X-ray energy is re-radiated.